It’s never too early –or too late– to start planning your holiday gift-giving agenda for the year, right, Readrrr? Especially if you have exactly negative six dollars to work with– if you are perpetually on the verge of being in the hole, gift-giving requires some extra planning.

Budgeting is everything. That, and thinking ahead and far, far, far outside the box of budgeting. In fact, think outside of the bounds of capitalism and imperialism and redundancy altogether! The nuns are known to be thrifty, so I’ve been trying to soak up their thriftiness because, despite being the Sistrrr Santa Claus of the Abbey, I am not thrifty: money means nothing to me and so I’ve never been able to acquire much of it. If pennies are all Heaven can offer us, I’m in big trouble.

What I am is poor, and so are all the nuns; we have financial poverty in common. Our wealth is the heavenly kind: it is made of the spirit and only that. But it all evens out, anyway, in the end because God is The Ultimate Broker and God will make sure every nun gets her fair share of eternity.

Even though the nuns are poor, they insist on holding gift exchanges whenever possible. They take gift-giving seriously and they make an intense sport of it. When a nun is inducted into the Hall of Infamy (i.e., when a nun becomes a nun), she is assigned a gaming partner for life.

Because the nuns spend a lot of time cloistered together, gaming is a vital part of their existence. Once you are assigned a gaming partner, you are stuck with her for life. Sometimes life ain’t fair. But whether it is or is not fair, there will be games and nuns and nuns who play games. A nun’s gaming partner is both her competitor and her team-mate. The idea is for growth and learning to occur together, as well as bonding. That’s the definition of sistrrrhood, right there. I have heard talk of the gaming partnership being akin to an arranged marriage within the convent walls, and I certainly can see how it would be interpreted that way– but I think of it as more of a God-ordained marriage. Only in extreme circumstances is a nun permitted to find a gaming replacement. I’ve never seen it happen, in my lifetime.

All activities in and outside of the convent are considered games, of sorts, and as such, game mates are also travel buddies. Sometimes gaming teams play against one another, but a nun is never without her game mate. Name any game, sport, or activity, and I guarantee the nuns have played/done it: chess (“Dude, you’ve been checking me out all night, mate!”), camping (“Bear…. bear…. big bear…. big bear chase meee”), holy-wine wasting (did I say wasting; make that tasting!), water polo (poe-Lo and pol-e.e.-owe), kite flying (“Send it soaring, Sistrrr!”), competitive yodeling (in full stylin’ German-Alpine attire), ski ball, duck-duck-goose (followed by Puck-Puck-Moose), bumper bowling (the bumpers being the nuns’ behinds), bumper carghs (pirate roleplaying), pin the tail on The Donald (“make him bray his bray-ns out!”), cards (Euchre is a favorite, though I haven’t yet been permitted to advance from Go Fish and War), bobbing for apples (mangoes, pears, navel oranges, nipples, grapes), don’t let the balloon touch the ground (my role as balloon is always requested!), recipe-off (we work tirelessly to write the best recipes for disaster), rock-paper-scissors-atomic bomb, badminton (“Ooo, who’s the big badminton wolf!!!”), forehead detective (I cannot tell you how many times I have been asked, “Am I Bea Arthur?”), musical chairs (to funeral marches), juggling (a lot of crap), taekwondo (“I’ll taek, you give me wand-o”), Danish longball (Ost og kirsebaer pa den lange, ja?), board games (can anyone say Bald-er-dash ), sailing and rowing (yer boat!), flame swallowing (“Just call me Dante!”), snorkeling (“Let’s share scuba gear!”), sky diving (think James Bond), quidditch (“You little snitch!”), paintball, billiards, croquet, fencing, tarot, ballooning, hand-gliding, field archery, dance (bossa nova, salsa, waltz, tango, cha cha, choo choo, rumba, samba, cancan, fox-trot, hula, bunny hop, horn-pipe, jig, hustle, lindy hop, mambo, polka, shag, shimmy, you name it), charades (Friar Follies), surfing (the wave districts), fishing (for cats), extreme pickle ball (“Pass that pickle over here, Sistrrr; give it to me, hard!”), competitive baking (a race to see who can eat the most cake in one kneeling), synchronized swimming (the nuns soar like flipper), bouldering, Judo, Sumo, laser tag (we chase down suburbanite ladies and zap them with lasers, telling them we have the miracle cure for their wrinkles…please), jousting, rodeo, Cornish hurling, jumping rope, snow-shoeing, kick the can, capture the missal, potato-sack racing, dungeons and dragons, arm wrestling, toe wrestling, foostie, frostbite, snow angel-ing, ice carving, darts, disc-ing, discmanning, running, hill climbing, knife throwing, etc. While the nuns are morally opposed to hunting (and skiing, after we lost Sistrrr Tewskis to the Black Diamond), they are masters when it comes to hide-and-seek. The nuns excel in word hoarding and all kinds of word games, too, and they are unmatched in the art of mind-gaming.

As for the game of gift-exchanging, we do it with our GP all year long and we have to be creative about it.

Based on my spy study on the nuns, I have drawn some conclusions. This is not scientific, Readrrr; it is beatific! I have concluded that the nuns desire three things above all:

Is that too much? Probably. I don’t know how you could give this to the nuns, but I am still committed to helping you figure out what to get the special little nun in your life.

Something do-able for humans with actual dough in tow. Sow. Below.

Ten Great Gift Ideas for The Nun in Your Life

(Whatever you do, don’t give a nun a toilet. The nuns are against indoor plumbing.)

That little list should make things easy for you as you head out into the great wild of apostolic consumerism. But if you’re a probing probationary nun, like me, Readrrr, then you have much more work to do and I can only wish you a sinister “good luck.”

I have always had good luck when it comes to giving gifts until recently. I can no longer give gifts because The Vat took the phrase “tis a gift to be simple” too far while also conveniently failing to remember the phrase “tis a gift to be free.” (Sometimes a gift is a right, Readrrr.)  The Vat has me pent up in this tree house outside the abbey grounds as punishment for trying to give gifts. They say I’m “too gifted” but I know what it really means. It means they want to continue lying and they don’t want the gift that keeps on giving, that is my mouth, to be open. So they keep me here, in my tree house, which they call The Little Nuthouse and which I call The Little Nunhouse.  The ‘jack of all tyrannical trades’ Vat has made it its job to keep me under watch here.

I do sometimes get messages-in-a-bottle of acorns from the wild squirrels outside my window but I don’t invest anything in those because those kind of nuts are laced with the apostasy of arsenic. Sometimes I miss being able to visit my old skipping grounds at the Friary Priory, but most of the time I am suffering from The Vat’s ‘Electroshock Her Until She Never Leaves Her Room’ methods of keeping me shut up in The Nuthouse. Terrible as that is, at least I don’t have to live at the Neo Nazi Nunnery, across town; I -am- thankful for that. The Friary Priory, the Neo Nazi Nunnery (aka Casablanca Cloister), and Anathema Abbey are all connected, but I stay away from the NNN by choice because -hello- it’s Swastikaland. No nun with a nose like mine would step foot in that impoverished hub of anti-Semitism. Everything at the NNN is under surveillance. A nun who finds herself stuck there is lucky if she gets to have a few minutes alone petting her kitty in the afternoon before the Father Nazi returns and she has to serve him again. Anathema Abbey is where I reside currently (the little nun tree house is on its grounds). Fathrrr Franklin runs the place. The Nazi segment of The Vat named the abbey ‘Anathema’ when I was relocated here. I always take it as a great compliment: to be the shame of and to be shunned by the Nazis. Another verification of my Jewtheran identity.

When Fathrrr Franklin is out visiting Fathrrr Pat at the Shaggy Abbey, I wait impatiently and inundate myself with powerful prayers, like those written by Dorothy Parker. And I remember fondly the days when gift-giving was a daily habit and what defined and was celebrated about the nuns.

In honor of the ancient hiss-story of gift-giving, I am going to share with you one more list: a list of some of the first gifts Sistrrr Shakespeare gave to me.

(The Thought That Counts) 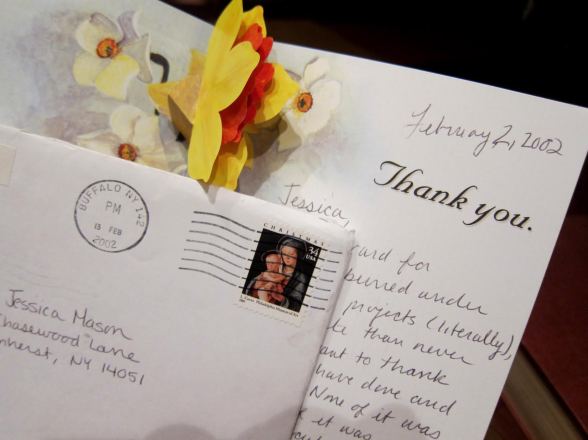 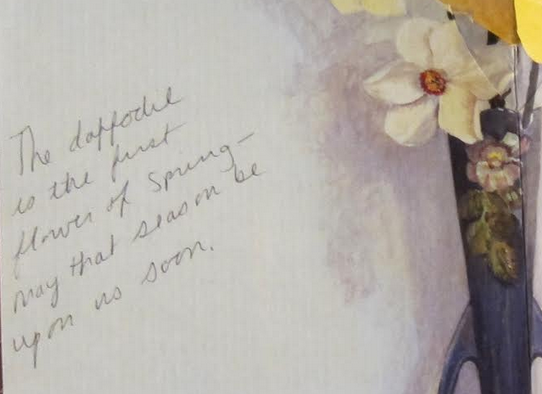 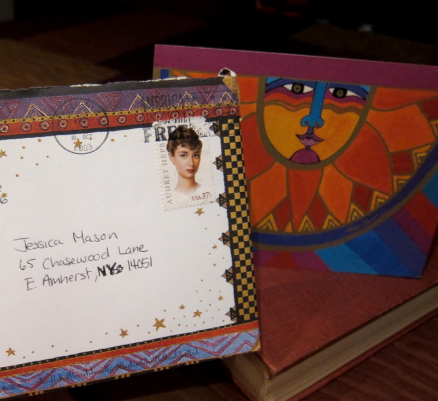 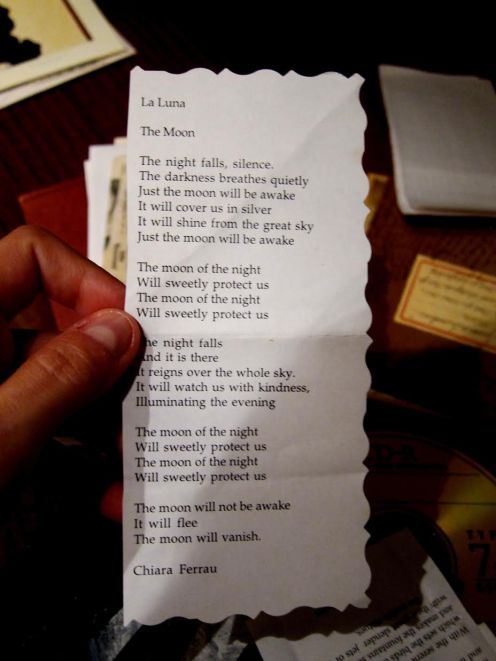 Readrrr, if you give a gift like one of these to the little nun in your life, you only have to do it once. She will thank you for the rest of her life.